'Congo won their first game at an Africa Cup of Nations finals since 1974, beating Gabon to move top of Group A.

The Gabonese enjoyed the better of the first half but fell behind after 48 minutes when Prince Oniangue stabbed the Red Devils in front from a corner.

A draw against Burkina Faso on Sunday would take Congo to the q...

Congo Brazzaville produced a shock victory in their Africa Cup of Nations qualifying campaign, beating Nigeria 3-2 in their Group A match in Calabar.

It is the first time Nigeria have lost a competitive home game in 33 years.

Nigeria, the reigning African champions, took the lead against Congo after 13 minutes when Efe Ambrose's header managed to find a way past Congo goalkeeper Massa...

'The new Guinness ad featuring superbly dressed Congolese men has been getting a lot of attention since its release earlier this year.

The ad follows the men as they shed their working clothes and transform themselves into polished, hat-wearing, cane-wielding style moguls - because, as the narrator says, "in life, you cannot always choose what you do, but you can always choose who y...

'The President/Chief Executive Officer of Dangote Group, Aliko Dangote, has donated the sum of $500,000 to help ameliorate the sufferings of victims of ammunition dump explosion in Congo.

A statement from the group said Dangote announced the donation while on condolence visit to the President of Republic of Congo Denis Sassou-Nguesso.

Speaking at the President’s office in Brazzaville, Dangote said the visit was to commiserate with the President and people of Rep...

Funeral held for the lives lost in depot explosion

'A mass funeral has been held for victims of a huge explosion that ripped through the Republic of Congo's capital a week earlier.

At least 240 people were killed when an arms depot in a densely populated part of Brazzaville went up in flames.

Everything is 'under control'

The arms depot fire that raged for two days in the  Brazzaville is now under control, officials say.

The blaze has claimed some 200 lives, with many more people feared buried under the rubble.

Rescuers say it is still too dangerous to go in because of unexploded weapons.

There are fears that 'hundreds' of bodies could be buried. Brazzaville's hospitals are struggling to cope with the injured

The Red Cross admitted that it was...

Mass burial for the loss in Brazzaville

The more than 200 victims of last weekend's deadly arms depot blasts in the Republic of Congo's capital will be buried Sunday in a mass funeral, state radio reported.

Firmin Ayessa, chief of staff for President Denis Sassou-Nguesso, announced on state radio Thursday the burials will take place at Brazzaville's main cemetery and said that the "government will always rema... 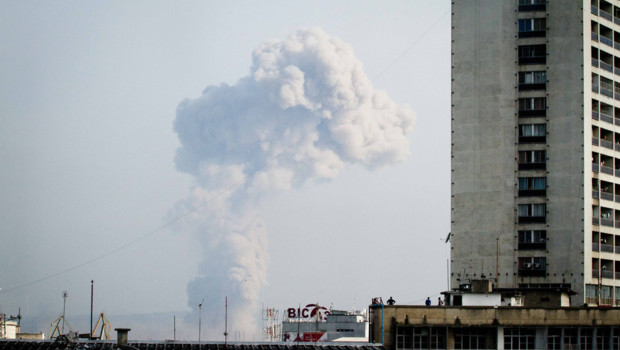 More than 200 were killed in a series of explosions Sunday at a munitions depot in Brazzaville, Congo's capital, said theCongolese Minister of the Interior, who was unable to specify the number of injured.